Is it a coincidence? Who knows? These two cousins around the same time three years ago both were given the nickname Ranger on separate occasions by different groups of friends. However, the name has stuck for both of them and now they must vie to see…Who is the Real Ranger? 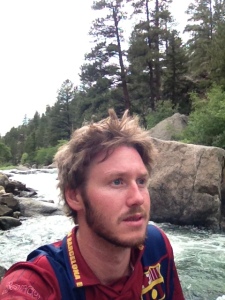 For as long as Tommy can remember, traveling and biking has been imprinted in his life. In the first two years of his life, he got the opportunity to live in South Africa, due to his father’s career that sent the family worldwide. He got the opportunity to live abroad for the second time at the age of seven, when his family lived in The Bahamas for five month stint. All the while, biking played an important part in his childhood development. From a young age, Tommy can recall racing down the hill in his neighborhood in California and building jumps out of whatever he could find in the backyard. Aspiring to jump bikes led to his short career of BMX racing in Florida when he only eight years old. After moving to Colorado at the age of nine, the next chapter in his cycling profile was written, Mountain Biking! Growing up in a rural mountain town in Western Colorado, Tommy had the opportunity to ride cross country and downhill trails all over Western Colorado and Moab, Utah. Upon graduating high school in 2008, Tommy moved to the platinum bicycle friendly town, Fort Collins, CO. He spent the past five years acquiring a double major in Forestry and Natural Resource Management from Colorado State University.  After befriending other bike enthusiasts in the bike mecca, his love for cycling continued to blossom. It was the summer of 2012 when he was introduced to the world of bike touring and the realization that he could combine his passions of outdoor recreation, world traveling, and sustainable living into the trip of lifetime. This past summer, Tommy worked for the Rocky Mountain Research Station doing field research, but upon returning from the trip he hopes to fight wildland fires and begin his career in fire management.  Tommy’s other hobbies and interests include but are not limited to: rock climbing, backpacking, camping,  mountaineering, snowboarding, gardening, composting, trying microbrews, seeing live music, rafting, canoeing, and other means of getting a thrill. The tour across the equator will be Tommy’s most extensive tour so far and he could not be more ecstatic to experience the joy of the low impact lifestyle that bike touring provides.

Ever since childhood Bradie has had a true love for the outdoors. From becoming and Eagle Scout at fifteen to spending his free periods in high school rock climbing, he soon understood the importance of protecting the land for the use of future generations. Bradie received his Outdoor Education degree from Colorado Mountain College and found a passion for international travel. Bradie has been fortunate enough to travel through over 20 countries on five continents. Seeing places with his own eyes such as the Temples of Angkor, Uluru, Moai of Easter Island, Eifel Tower, Great Barrier Reef, Alps and Southern Alps, Big Ben, the busy cities of Hong Kong, Prague, Taipei, Santiago, Bangkok, Sydney, Black Rock City; and meeting the most interesting people from countless cultures. He currently works as a tour guide for PEAK Adventure Travel taking internationals on two and three week road-trips throughout the USA and Canada, exploring national parks and major cities. His dilemma is how to travel in a sustainable manner after he saw first-hand the ridiculous expense of resources during his three months spent at McMurdo Station, Antarctica. Bike Touring is a possible solution, definitely the rookie of the crew he looks forward to experiencing the cycling world first hand.