Starting the bike tour in San Diego could not have been a better call. We got taken care of by the locals so well out there and we cannot express our gratitude more for the love we received from Whiting Court. We stayed at our cousin Greg’s tiny studio apartment for 4 days before taking off. This apartment is barely big enough for himself, but somehow he managed to fit 4 guys, our gear, and bikes in his space. As soon we rolled into San Diego, we were ushered inside and told to throw on our costumes because we were goin to the Monster Bash! It was a downtown block party, with drink specials, 17 djs, and thousands of hot chicks. Needless to say, Greg sold us on the party with the thousands of hot chicks. The night was so wild and could not have ended up better. Well it could of, if you know what I mean, but still the Bash was the best party we had been to in a while.

Our time spent in San Diego was great, going on bike rides, checkin out the beach, and eating Cali Burritos. All was good until we went for a late night ride on Oct.27, stopping at the truck, we noticed one of the bikes missing. B Rad’s bike had been stolen. The asshole, scum of the earth bike thieves had cut both locks that we had the bikes locked with and took B Rad’s brand new Long Haul Trucker. In the morning, Tommy had to call B Rad and break the news to him. It was the most awful thing he had to do, and we were truly sorry. Upon hearing the news, B Rad decided he was out. Just like that the group dynamic had already changed before the trip even started.

The morning of October 29th, THE BIG DAY, we woke up, took care of some last minute errands, and went out to breakfast with Maura, Ike’s family friend. We went to this joint called Kono’s, which is right by the pier on Pacific Beach. If your looking for a cheap, huge breakfast, go to Kono’s. After breakfast, we took care of some last minute chores, before loading the bikes, and heading to the beach to snap those going away photos we all know and love.

So the plan was to ride to Chula Vista, then get shuttled across the border by Christian, our new Whiting Court homie. Christian, who lived in Tijuana for six months, convinced us we do not want to ride through TJ because it was so dangerous and offered us a ride. Well, getting out of town was not so smooth, getting turned around by traffic and cross streets, and not really having a good riding dynamic. I think we were all overwhelmed by what was going on and our heads weren’t straight. So we were late on the meet up spot and Christian had to meet us somewhere closer and swoop us up. We had 5 dudes, 4 bikes, and a whole lotta gear piled into a single cab Ford Ranger. It really looked like we were smuggling something or someone over the border, but getting through the border was quick and painless. We stopped, Christian explained to Border Patrol our story, flipped out our passports, and we were on our way, just like that.

Driving through Tijuana was pretty shocking. There river people everywhere, looking for scraps of whatever they can find in order to survive. Christian explained to Tommy who was sitting in the cab how that stretch of road is notorious for river people bum rushing people in a bind to rob them for whatever they can get. It mad us really glad we chose the route we did and didn’t bike through TJ. But after getting through there, the only option for roadways was the toll road, which is illegal for bikes to ride on. So to our dismay, Christian had to take us to Rosarito too. Unfortunately, our first day of tour did not included much “bike touring”, but this was the right choice. It was our first  day, out and TJ is some real stuff, it is not hyped up. If we didn’t get the ride, we would have been eaten alive by TJ.

So we ended our first day of tour by getting some tacos y cervasas at a local restraunt and talking to our server buddy Jose. Jose said he is friends with a priest and the priest would be willing to bless our trip. So Fransico blessed us, and sent us on our way back to the hotel. Side note, thank you Aunt Shannon and Uncle Jim for booking us the room. Very nice and extremely comfortable! So that is the first day in a nutshell!

We would like take a minute to personally thank some individuals from Whiting Court that made our last three days in the States the best they could be.

Greg Kozera- Your the man! We are so lucky to have you as a cousin. You hooked us up so much man, and we cannot say thank you enough!

Prudence- Damn Prudence, I don’t think we have met a more giving individual. You spent your day off work running errands for us and making sure we had everything we needed. You are such a kind and loving soul!

Christian- Thanks for the ride. TJ would have killed us without you man!

Brandon- Thanks for taking care of shipping us all those cliff bars! Your gonna keep us energized the whole way!

Dane- Thanks for the snappers! It really made our bike ride on the boardwalk that much better!

It’s gonna be a wild ride. We are off to Ensenada today, who knows when we will have the interweb next, so stay tuned for your next episode of Bike Touring with Ranger Rides! 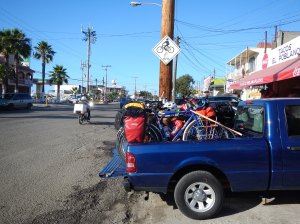 Our leave date is fast approaching! Three of us, Bradie, Ike, and Tommy,  are leaving from Rifle, Colorado on the morning of October 24 and doing some family visiting while in SoCal. Heinrich and Brad are flying into San Diego from their home states, where we have to pick them up at the airport. Tommy and Bradie’s cousin lives in San Diego, right on the beach, so naturally we are making this our take off spot on the morning of October 29th!

This trip is been a long time coming and a lot of planning and preparing has taken place. The two Rangers were finally able to get together this past weekend, hang out, and ride. Bradie has been based out of California all summer guiding road trips and was finally able to get back to Colorful Colorado! He came down to South Fork, Colorado for the weekend where Tommy is living currently. We were able to do a day ride from South Fork to Creede, clocking in just about 45 miles for the day. It felt great to be riding through mountain valleys of the San Juans,  staring in awe at the fall colors. Needless to say, going on this ride boosted the stoke level of the Rangers ten fold. Before we know it, the pedals will be pushin’, heads held high, and the wind at our back! (Hopefully)