It is amazing how fast time is going for us. It seems likes just yesterday we were still in Mulege, resting up for another week of riding. Since our last blog, we were able to really soak in the low pace lifestyle of Mulege. We got sucked into the wonderful lifestyle of Don Chanos RV Park. While in Mulege, we were able to use the residents fishing poles, sea kayaks, snorkel gear, and even kitchens to cook our fish tacos. Ike and Henry both caught a fish a piece which enabled us to have a delicious dinner. Bradie and Tommy were not as lucky with the catch, but while fishing we had  a monumental life experience. While paddling around in our kayaks, a 25+ foot whale shark swam up to us to feed. We are literally less than 10 feet away from the biggest fish that either one of us have ever seen! It was an earth shaking moment for us and one that neither of us will ever forget! In excitement, Tommy flipped his kayak and briefly got swim with the whale shark, accidently.

We couldn’t of had a better experience in Mulege and we would like to thank everyone that made it what it was. Thanks Pete, Sonya, John, Dave, Manuel, Tuna, and especially Rick. You all hooked it up so much and were so stoked on your community! But its off to El Coyote for a couple days to camp on the beach and soak in the beauty of Bahía Concepción! Its a magical and truly a wonderful community. NOLS Mexico is located just south of the beach we camped on. Underneath a palapa, we made base camp for two nights, beneath our new friends Mark and Jen’s Winter home. 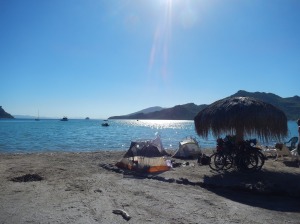 ~Our home for a couple days on Coyote Beach~

We woke up to hot coffee and a fruitada courtesy of Jen! After that they let us borrow their sea kayak so we could troll around Coyote Bay, the Bay within a Bay. We finally figured out the rest of the day because Mark told us how Bertha’s Bar is poppin on Wednesday and we needed to go out with them. Sold, we never turn down a poppin’party! But before going out, late in the afternoon, our buddy Sean took us sailing after persistantly looking for us for 3 days. He promised to take us sailing and kept his word. He has a 26 foot catamarán, perfect for an evening sail. It was Tommy’s first time sailing and Bradie’s first time in quite awhile.  The winds could not have treated us better and we enjoyed the Bahía Concepion via sail boat, enjoying the setting of the days sun. We ended an already, epic day with a few drinks at Bertha’s then back on the bikes to finish the last part of Baja. On the way to the Bar, we saw a bright, orange shooting star blaze across the sky for over 10 seconds, and evening splitting into two pieces. So wild! 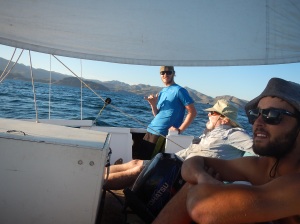 ~ Tommy and Ike soakin’ it all in with their Captain Sean. Thanks again!

Well the morning came quick, but we were all eager to get back on the bikes and ride again. We got spend the day riding throught the hills of Bahía Concepion all day, soaking in the sun, with open sea to our left and densely vegetated mountains to our right. Pretty much the most beautiful section of Highway 1 that we have seen so far. After leaving the Bahía, we entered into this wide open, desert valley with large, jaggedy mountains off in the distance. Such a crazy landscape and to think, this will be the back drop of our home for the night. Thats the great part of bike tour, every night we have a new home, and when we wake up in the morning, we have no clue what home will look like at the end of the evening, but it never ceasts to be amazing every night.

Our next day, we had a 60 km into Loreto, another seaside city, where we had the intentions of eating 10 fish tacos a piece. Less than 20 km from Loreto, we saw our buddy Rick driving back to Mulege from picking up his family from the airport. It was awesome seein’him on the side of the road and meeting his family. After snappin’ some roadside photos, Rick generously bought our lunch and the fish tacos were on him. We went to this taquería that had the best fish tacos we have had, twice the size of any other one we have seen so far, with the full salad bar! Those are the best because we can load our tacos as big as we want. It’s hard to satisfy our almost endless appetites, but this taco stand finally did it…While we were eating we met a man in a wheelchair named Dave, who had extensively bike toured around the world and even toured the Baja Penninsula on four separate occaisions. He traveled the whole world by bike and never was hit by a car, but in his hometown, he got hit by a car. What an inspirational person and  he gave us a great piece of advice. ” It’s up to you whether you have a good day or a bad day. It is what you decide to make it”. He told us of a beach south of town that we could camp on for free, so back on bikes to make it to camp.

~Rick and the crew just outside Loreto~

That night we had made a three day plan of what was to come. Kind of odd for us because we use go day by day, but we had a few goals in place. We needed to get to Ciudad Insurgentes, 98 km from us with a large hill climb in between. The climb was 11 km from our camp, which was perfect. We had 11 km to warm up, gettin’ psyched for it along the way. The canyon that we got to climb was out of this world, it felt like we in Jurassic Park or something. Bradie thought it resembled Zion National Park while Tommy thought it resembled a cross between the Grand Canyon and Hawaii. So wild and such an awesome scenery for a good part of the day. After climbing for the first half of the day, the canyon finally plateaued and we had a slight downhill tailwind to push us the 50km we needed to get us to Ciudad Insurgentes. The importance of starting here in the morning was that it was the last good resupply spot and set us up perfectly to be able to achieve the 100 mile day we have been looking for all trip. After filling up our dromedary bags, Ike found us a place to stay. it was a corraled garden outside of a dairy farm in town. The perfect setting for camp and it even had a table for us to cook on! After dinner, we talked about the feasibility of the 100 mile day and got ourselves psyched up.

For the first time all trip, Tommy set his alarm. Setting it for 5 am, he woke up Bradie and the gang and we quickly started cooking coffee and oats to fuel our bodies for a long day. If we wanted to ride 100 miles we needed to start early and get as much daylight as possible. Getting on the road by 7am, we quickly got in the paceline formation to save our energy by drafting. By lunch time, we had already put down 100 km for the day, feelin’ good. With 30 km, we had to stop to refill our water bags and get some more food in this tiny town. After talking to a moto tourist who gave us some good beta on Mainland, we pushed onwards. Bike heavy with 10 liters of water, we pedaled into the hardest section of the day. We went from flat straights to rolling hills and a little head wind. Finishing the day was tough, one of the hardest things we have done the whole trip. We were physically and mentally exhausted, but we completed our goal of 100 miles. Thats the most Bradie and Tommy have ridden in a single day, especially with a 120 pound bike. Right as we hit the 100 mile mark, there was a dirt road where we could pull off into the desert and make camp for the night. 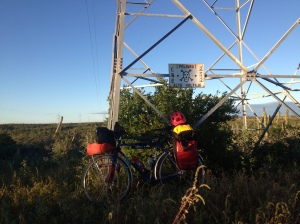 ~Danger! This bike has high Voltage~

Taking our time in the morning following a long, hard day, we had 80 km to go until we reached La Paz. Rolling hills and head/crosswinds dominated throughout the whole day. This made what could have been a casual day after two very long days, a pretty difficult push into La Paz. Tired and ready to take a shower, we made the push into La Paz, keeping spirits high! Riding into the city was pretty wild. Traffic was high and it was a real city. We haven’t seen a city since leaving San Diego and we had to be on our A Game in order to navigate safely through the traffic. Working our way in and out of traffic, we found our way to the Malecón and outside the popular and recommended “The Shack”. We had to get a celebratory beer…We just completed the Baja 1000, Tijuana to La Paz!! It felt to know we had completed one large segment of our tour already. We have grown as a team so much and kick ass! After celebrating, we made our way to the Pension California, the local Hostel, where we will shack up for the next two nights and figure out what is to come.

~Taking over our room in Pension California for a couple days~

Many errands need to be done, especially some laundry! As we soak in what La Paz has to offer, we are also planning our departure into Mainland. Right now the plan is to take the ferry across to Mazatlán, but who knows maybe some other alternative means is waiting for us. Upon arriving in Mazatlán, we are gonna be greeted by our great friends Wes and Michele!! Can’t wait to see them and chill in Mazatlán! Especially since they are bringing down our recently ordered Helinox Chair 1. No longer are we livin in the dirt, movin’up in the world!  Stoked for whatever adventures come our way in the next few days!